All City Buildings Are Closed Until Further Notice  |  COVID-19 Information

In 1850, Col. Henry Washington of the U.S. Army Corps of Engineers discovered that the area's canyons resembled the interior of a grand cathedral. Recording history, he named this canyon of majestic architecture Cathedral Canyon.

Four early developers later had the same impression; in 1925, they developed the area's first subdivision and named it Cathedral City, California.

These steps have historical significance. Although the personal thoughts of the pioneers are unknown, their confidence in the prosperous, expanding and vibrant city that emerged remains forever. 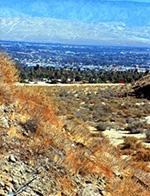 Incorporated in 1981, Cathedral City is dedicated to providing a quality lifestyle and business climate for those here now and those in the future. The Coachella Valley, with a population of 346,518, is the very essence of Southern California lifestyle - a destination of friendly neighborhoods, lush country clubs, diverse shopping and unlimited business potential.

Strategically located, with borders on both side of Interstate 10, Cathedral City is a haven for expanding and relocating businesses. Cathedral City ranks in the top three cities in the Coachella Valley in population, retail sales and total taxable sales.

Businesses view the region as a triangle of opportunity between Los Angeles and San Diego with Coachella Valley inland equidistant from each. This triangle of commercial businesses, light industry, and professional services is expanding and becoming one metropolis of continued growth.