All City Buildings Are Closed Until Further Notice  |  COVID-19 Information 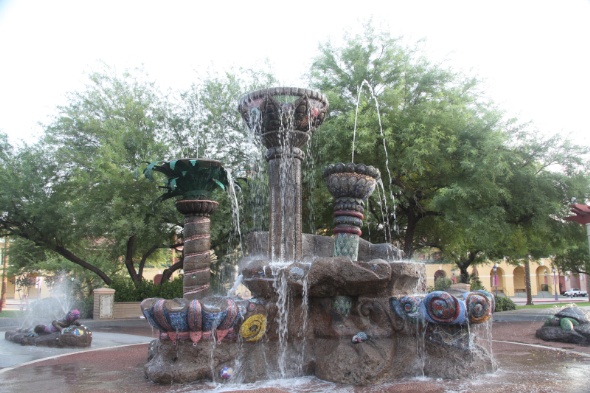 The Fountain of Life was designed by artist Jennifer Johnson in coordination with architect Reuel Young, A.I.A. It was built by House of Stone and Fountains and Landscape Enhancements. Artisans whose families have sculpted stone for more than 600 years carved the fountain pieces out of adoquin stone from a quarry near Guadalajara, Jalisco, Mexico. Once the individual pieces arrived in the desert, Johnson spent more than a year adorning the fountain with hand cut mosaic tiles and glass. Reflecting the nature and history of the desert, the fountain features three central stone columns surrounded by sculptures of big horn sheep, lizards, tortoises, fishes, shells, wildflowers, birds and other creatures found in the area both now and in the past. The rooster and hen represent the importance of family in both the Anglo and Latino cultures. A Cahuilla basket embedded in the stone pays tribute to the Agua Caliente Band of Cahuilla Indians, whose gift of the soft surface enhances safety for children of the desert. Buddy and Beverly Rogers became the fountain's first major donors with a gift that launched the project.


The overriding theme found in the fountain's design is the spiral, a symbol of continuous birth and ever-upward rejuvenation, the essence of the process Cathedral City is involved with downtown. The spiral appears in the underlying floor, the large basins, atop the shade structure, in the horns of the bighorn sheep and in the form of the sofa seating area. 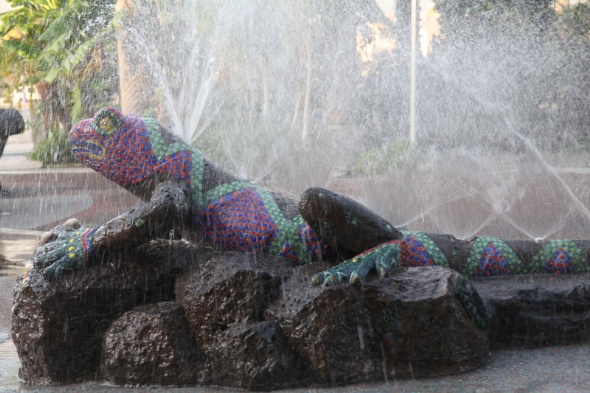 Within the fountain, the large scepter-like form suggests Cathedral City's movement toward becoming the monarch of cities in the valley. The unfurled acanthus leaves atop the Corinthian column reflect the classical design of the new Civic Center, while the asymmetry of the fountain balances the building's strict symmetry.

The fountain's tri-color soft surface is made of ground recycled tires, creating a supple foundation that is becoming the accepted standard in children's public play areas. 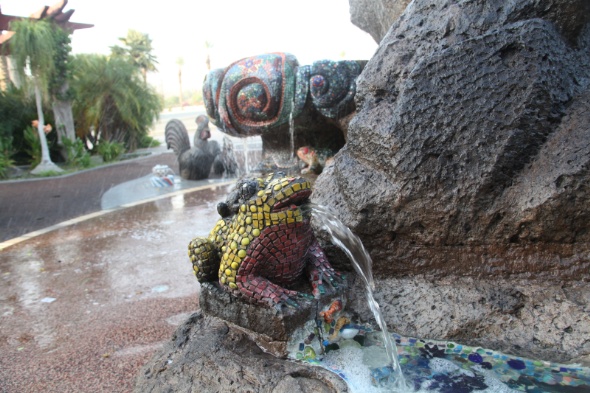 Not only an artistic achievement, the fountain also represents an engineering feat. The central columns are designed with steel rod irons to withstand seismic events. In fact, each stone piece, anchored to its own concrete pad, is tied to a central reinforced concrete cone that sits on a concrete base five feet deep by 17 ' x 12'. Before transport across the border, each stone piece was individually numbered, to facilitate assembly within the fountain here.

The fountain is designed as a recirculating system. Water flows between a 2,000-gallon surge tank and the fountain. The underground tank contains two 5.5 h.p. pumps with a capacity of 450 g.p.m. The pumps process the water through a manifold for distribution among nozzles for 32 separate fountain features. Each nozzle is adjusted for quantity and pressure, which affect the height of the sprays. Another underground vault houses the electrical, plumbing and mechanical equipment. Water filter and bromine treatment systems are designed to keep the water pure and minimize calcium build up that could dull the brilliance of the tiles.

The fountain's lighting system contains three components -- low voltage lights mounted on the wooden trellises that provide overall lighting, special 300-watt lights submersed in water (to avoid overheating) that illuminate the bowls, and a fiber optics system of 29 computer operated lights that can be adjusted for color, brightness and timing.

A video camera linked to the Police Department's dispatch room enhances security in the fountain area.

Except for occasional closures for maintenance, the Fountain of Life will be on all the time for the enjoyment of residents and visitors alike, and particularly the children of Cathedral City.